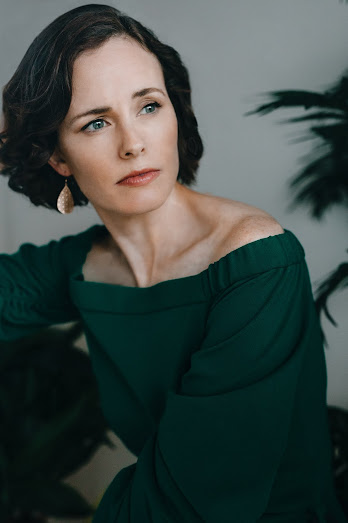 Ellen Adair is an actor, and her Pushcart-nominated book Curtain Speech, published by Pen & Anvil press, is a collection of poems about the theatre. Her poems have also appeared in Clarion, Cypher, Oddball Magazine, and The Charles River Journal. As an actor, she has had recurring roles on shows such as The Sinner, Homeland, Bull, Billions, The Slap and Veep, along with dozens of other television and film appearances, and stage productions Off-Broadway, regionally, and touring the country. She also writes for The Turf Sports, is a guest analyst on MLB Network, and has a podcast with her husband called Take Me In to The Ballgame. They live in Queens, with their dog, Mabel.

I’m currently bending most of my energy towards a novel, although it is a novel that has poetry in it. The poetry partly helps with some exposition, though we do meet the poet, even if we don’t recognize her as such in the moment, and it serves the plot at the very end.

As for that plot, my one line summary is that it’s about a god who has a mid-life crisis—the tension for an immortal in that phrase fully intended. I haven’t been able to come to more-expanded but still-succinct elevator pitch for it, but essentially, my protagonist is frustrated with the current structure for communication between gods and mortals. The arrangement was restructured thousands of years ago, but he doesn’t think it’s necessarily led to the greater enlightenment that was intended. So: he thinks about what he might be able to do. But under the structure of the gods’ universe, he doesn’t have as many options as one might expect, given that is he is, well, a god.

I’m also working on a couple of different TV series, but there’s no passing them off as anything but prose.