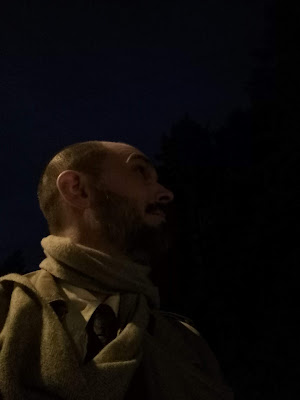 John Luna is a Canadian/Mexican-American artist, whose practice as a visual artist and writer includes painting, sculpture and installation, critical writing and poetry, and teaching in the areas of studio art, art history and theory. Publication of his written work in art criticism and poetry has appeared in Ditch, Canadian Art, Border Crossings, Canyon, Cordite, Train and Matrix, among others. Luna’s first collection of poems, Listing, was released through Decoupage Publishing in 2015. His second book-length manuscript was shortlisted for the Robert Kroetsch Award for Innovative Poetry in 2017. He the recipient of a 2017 BC Arts Council Project Assistance Grant for an ongoing project involving text and visual art.

1. What are you working on?

Currently I am working to arrive at something cohesive as a book for publication, the character of which will make it a thing with its own concerns rather than what would feel like a collection. These pieces are dense prose poems (each between one and three pages with not a lot of spacing) using references to commercial fragrances as the premise for reverie and meditation. At some point I became very interested in olfactory sensation as a point of departure for ekphrastic writing, as well as the subcultures that have formed around that; there are all kinds of ironies in that material. These poems are very worked over and developed over many sessions. By way of contrast, I’m also working on a series of rather raw and subjective-sounding sonnets based around the activity of reading, although it might be more accurate if we imagine ‘reading’ here as split up into separate (not always relatable) acts like ‘scanning’, ‘hearing’, ‘inferring’, ‘projecting’, etc.