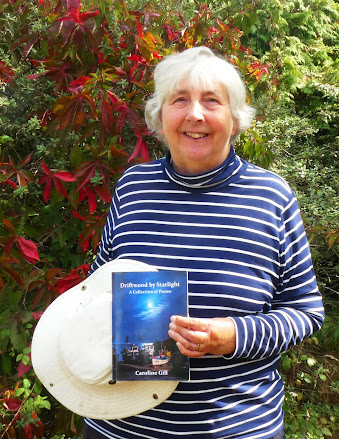 Caroline Gill’s poetry has been published in Driftwood by Starlight (The Seventh Quarry Press, 2021), her first full collection. The Holy Place (2012), Caroline’s Poet to Poet chapbook shared with Californian-based poet, John Dotson, was published by The Seventh Quarry Press, (Swansea, Wales) in conjunction with Cross-Cultural Communications (New York). Polar Corona, a prize-winning poetry pamphlet about Antarctic exploration, is due to be published by the Hedgehog Poetry Press in 2023.

Caroline’s poems have been published widely, both in the UK and abroad. Three sample poems by Caroline were included in The Book of Forms: A Handbook of Poetics Including Odd and Invented Forms by Lewis Putnam Turco (4th edition, UPNE, 2012). ‘The Figure at the Phoenix Mine’, a sestina, was awarded First Prize in the General Section of the international Petra Kenney Poetry Competition (2007). ‘Raft Race’ took Overall First Prize in the ZSL ‘Conservation’ Poetry Competition (2014). ‘Penwith Fingerstone’ was awarded Third Prize in the Milestones Competition (2017), judged by Brian Patten. ‘Preseli Blue’, Caroline’s poem about the Stonehenge bluestones, was included in a BBC Poetry Please programme in 2008. Caroline has read her poems at the Hay Festival, the First International Poetry Festival in Swansea, Poetry in Aldeburgh, the Festivals of Suffolk Poetry and Winchester Poetry Festival. Her outlook is shaped by her Christian faith. Many of her poems reflect her concern for the planet.

Caroline, who currently lives in Suffolk, UK, with her archaeologist husband, David, graduated in Classical Studies from Newcastle University in 1982. She gained a PGCE from the University of Exeter, followed by a TEFL Certificate from the Bell School of Languages in Norwich. Caroline has worked as a teacher, an EFL tutor in Oxford, Cambridge and Rome, and as a Cataloguing Assistant in a Cambridge archive.

I grew up in a home full of books. My paternal grandfather would read aloud to his children when my father was a boy, and my father carried on the tradition, introducing me to a range of poems from a young age. I remember reciting fun little rhymes like ‘Incy Wincy Spider’ at nursery school. One of my favourite picture books was Pear-shaped Hill by Irving A. Leitner. The story, which featured a boy named Jack and a girl named Jill, was told in rhyming couplets, which were easy to remember. I attended Sunday School from a young age, and enjoyed learning choruses, especially the ones that had accompanying actions. As a family we sometimes composed ditties to sing or recite on long car journeys. One of these was a tongue-twister about the recovery of injured seals in a seal sanctuary.

If my father shared his love of English poetry with me, my mother was responsible for introducing me to the world of Homer. She selected a child’s version of the Odyssey from the shelves of our local library for me to borrow; I very quickly became entranced by this epic and poetic tale of adventure. I was also captivated by the bold illustrations. Who could have foreseen that I would grow up to study and teach Classical Civilisation and marry a Mediterranean archaeologist?

My childhood town had an annual Three Arts Festival which included a themed poetry competition. My father won the Grove Poetry Trophy (a silver inkstand) two years in a row, and I followed suit at the age of eleven, with a free verse poem about a koala.