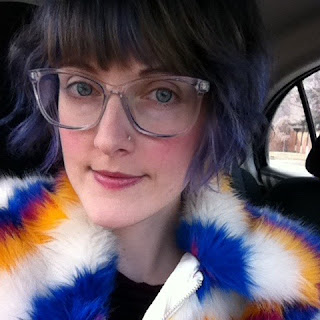 Jade Wallace's poetry and fiction have appeared or are forthcoming in Room Magazine, Vallum Magazine, Canadian Literature, The Dalhousie Review, Studies in Social Justice, and elsewhere. Their most recent solo chapbook is Rituals of Parsing (Anstruther Press 2018) and their most recent collaborative chapbook is Test Centre (ZED Press 2019). They are an organizing member of Draft Reading Series and one half of the collaborative writing partnership MA|DE. <jadewallace.ca> <ma-de.ca>

When I was in the third grade, we were assigned the task of writing a poem. I wrote a long series of rhyming couplets that began “I took a train to an open prairie./ Everyone there was very merry.” Shortly after that, I woke up in the middle of the night, feeling compelled to write a poem about a river. As I started writing about the river, I had one of those renegade epiphanies you have when you're a child. I realized that I didn't have to make the words rhyme, I could just do whatever I wanted. Such power. Poetry still wakes me up at night.