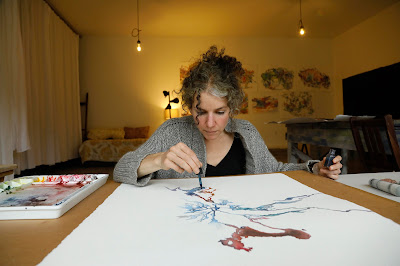 Daniela Naomi Molnar’s work asks how to live in the ecotone of now/here, on the brink of socioecological collapse/rebirth. She works across forms, melding painting, poetry, writing, curation, editing, site-specific intervention, activism, and teaching. Her mediums, therefore, are paint, paper, water, varied types of language, and varied forms of community engagement. Place is always one of her mediums. She uses these mediums to try to shape and nurture generative new ideas, ethics, and cultural change. Her work for the past several years has been focused on the complex, intersectional sociopolitical-cultural issues of climate justice and climate grief.

Daniela is the founding Department Head of the Art + Ecology program and a full-time Associate Professor at the Pacific Northwest College of Art, where she has been teaching undergraduate and graduate students since 2007. She is a founding member of the Board of Directors, a backcountry guide, and an all-around integral part of  Signal Fire, providing opportunities for artists to learn about environmental justice by engaging with public wild lands. She is founding Co-Editor of Leaf Litter, Signal Fire’s art and literary journal and Art Editor at The Bear Deluxe Magazine.

She is an MFA candidate in Poetry at Warren Wilson College and her writing has appeared or is forthcoming in Fugue, Tripwire: A Journal of Poetics, Bomb Cyclone, petrichor, LEON, Discursive Impulse, GAZE, Archivaria, and Submit.

She is a member of the third generation of the Holocaust and a daughter of immigrants. She grew up in and around New York City and lives in Portland, Oregon, in the Cascadian bioregion on the unceded land of the Clackamas, Cowlitz, Chinook, Multnomah, and other Indigenous peoples.

I grew up inside a braided river of languages: Hungarian, Romanian, Hebrew, Yiddish, a bit of Spanish, English, and, predominantly, Huroheyisen (a ragged agglutination of all of the above). My parents are immigrants and I spent a lot of time with my grandparents in their immigrant community in Queens. I recall walking down the bustling street with them, my small arm raised to hold my grandmother’s soft hand, feeling sensorily immersed in a ragged river of heterogenous colors, sounds, scents — and languages — trilled, shouted, sang…

Because I didn’t know any of these languages fluently other than English, their sounds were allowed to just be sounds. And this attunement to sonic sense over rhetorical sense is, I believe, one of the fundamental orientations of poetry.

Poetry also found me in the songs and prayers of my childhood, which included a lot of time spent in Jewish synagogues with my parents and grandparents. Most of the prayers and songs were in Hebrew or Aramaic and often heavily relied on rhyme and repetition. I learned sound sense in these ways, too, while also learning what it sounds like to pray to a broken god: poetry.