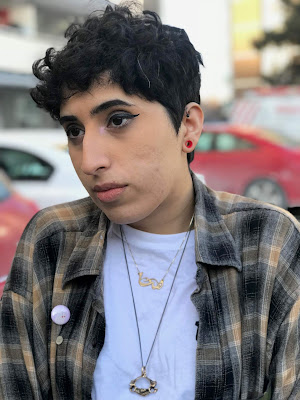 Hana Shafi is a writer and artist who illustrates under the name Frizz Kid. Both her visual art and writing frequently explore themes such as feminism, body politics, racism, and pop culture with an affinity to horror. A graduate of Ryerson University’s Journalism Program, she has published articles in publications such as The Walrus, Hazlitt, This Magazine, Torontoist, Huffington Post, and has been featured on Buzzfeed India, Buzzfeed Canada, CBC, Flare Magazine, Mashable, and Shameless, Known on Instagram for her weekly affirmation series, she is also the recipient of the Women Who Inspire Award, from the Canadian Council for Muslim Women. Born in Dubai, Shafi’s family immigrated to Mississauga, Ontario in 1996, and she currently lives and works in Toronto. It Begins with The Body is her first book.

How does your work first enter the world? Do you have a social group or writers group that you work ideas and poems with?

Usually it's shyly sending it to a friend with about fifty disclaimers that it might really really suck. I'll generally send it to friends who are also writers or artists, and see how they feel about it. It's always very nerve-wracking, and I obsessively reiterate that it's OK if they don't like it for fear that they might only say nice things to spare my feelings.