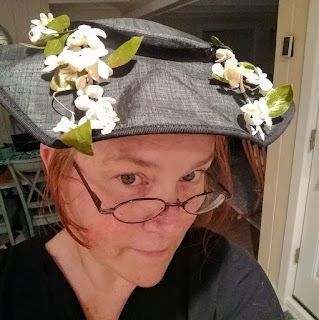 Kelley Jo Burke is an award-winning playwright, creative nonfiction writer, poet and documentarian, a professor of theatre and creative-writing, and was for many years host of CBC Radio’s SoundXchange. She was the 2017 winner (with composer Jeffery Straker) of Playwrights Guild of Canada’s l Best New Musical in Development Award for Us, which premiered at the Globe Theatre Feb 28 of this year, as well as the Sask. Lieutenant-Governor’s Award for Leadership in the Arts, the 2008 Saskatoon and Area Theatre Award for Playwriting, and three City of Regina Writing Awards.

Shakespeare. My mother was an English teacher, who had attended a posh East Coast American college, and the house was full of what was English canon at the time. First and foremost was Shakespeare. Her gigantic volume of the collected works was held in significantly higher regard in our house than the Bible. I could recite passages from Romeo and Juliet and Hamlet when I was six. I fell in love with iambic pentameter. It is dead easy to memorize verse that is in iambic pentameter, because it is the natural rhythm of speech. It came to me so naturally that the first real writing I did for theatre was actually poetry; Shakespearean-style verse, in iambic pentameter, that I wrote for a production by my young company. Everyone thought it was a little freaky that I could write verse, in Shakespearean dialect, and in that rhythm. I thought it was weird they couldn’t.