Why is poetry important?

Posted by Thomas Whyte at 11:00 No comments:

What do you find most difficult about writing poetry?

After initial, experimental exploration of an image or cluster of images, comes the graft. The process of refining, shaping, rearranging, etc, is time consuming and hard. I have to think about the poem differently, critically. The process of challenging myself, being really tough on myself, can be exhausting. I often feel as if a poem can never be finished satisfactorily. Its faults and foolishness obscure everything else about it. The solution comes through leaving a poem alone for a few days, or even longer. Going back to it, I’ll often see it differently and realise what I need to do to complete it. Thereafter, the challenge is to not constantly tinker. My visual poems in particular are subjected to endless tinkering, and sometimes small adjustments add up to big changes, so that the revised visual poem is radically different from the original: effectively a different poem.

Posted by Thomas Whyte at 10:00 No comments:

What do you feel poetry can accomplish that other forms can’t?

Poetry is the queerest of all the artistic letters—at least more so than fiction or essay. On a formal level, poetry can assume whatever shape it deems vital to its intent: prose chunk, a list, reportage, documentary, instruction, spell—the possibilities are only limited to the practitioner’s imagination. This isn’t to say that fiction doesn’t do this kind of shapeshifting too. To be sure, one only needs to see: the shifts into lyric and verse in Toni Morrison’s The Bluest Eye and Beloved; Tommy Orange’s There There—with its percussive anaphora in the chapter on the drummer-character Thomas Frank or the essay-like prose of the “Prologue” and “Interlude” chapters; the play that one suddenly finds themselves in the middle of in Christopher Castellani’s Leading Men. No, my point is: where this shapeshifting is a necessity to the fabric of poetry, it isn’t necessary to how we experience fiction—although it is exhilarating when it happens there.

I’m also thinking about how some of my favorite poems handle words as objects. These are word-objects that have varying weight and textures, so that when they hit against each other, they create sound and music and other physical shapes. It’s the poet, for example, who notices the noun “duplicate” is a copy of the verb “duplicate”; or the way “parallel” contains parallel lines; or how “th” in the word “teeth” forces one’s tongue to be slightly bitten by their teeth. Unlike other artistic letters, the presence of word-objects is as vital to a poem’s success as any meaning or news that may be found on an informational level. At its best, poetry has the capability to engage the entire body, in a tangible way, when it is read.

Posted by Thomas Whyte at 09:00 No comments:

What poets changed the way you thought about writing?

The best poets are distinct in their pain, either through joy or the architecture of building time.  In that sense historical revisionary works appeal to me.  Likewise, I respect Wallace Stevens for his projections into the subconscious.  John Ashbery for his weirdness. Gwendolyn Brooks for her ritual revision of belonging and epic status.  I am drawn to messing with form, too.  The most pertinent example for me are the L-A-N-G-U-A-G-E poets, who are architects of transcendental distinctions. I also enjoy the many personas of Pessoa, and the ballade quality and folk vision of Gabriel Garcia Lorca.

Posted by Thomas Whyte at 14:00 No comments: 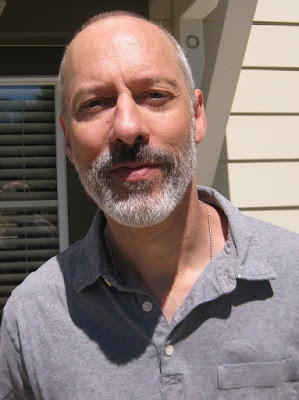 Mark Harris’ most recent booklet The Other Other reprises a collaboration with artist Keith Crowley at Art Center Sarasota in May 2019, an exhibition that paired paintings "Familiar (1–12)” with a multi-part poem "Nocturnal". His poetry has appeared in a wide range of magazines, and several compilations, including NOON: An Anthology of Short Poems and a Norton anthology Haiku in English: The First Hundred Years. He currently resides in New Jersey, where he devotes an increasing amount of his energy to Ornithopter Press, an independent publisher of poetry.

I’ve returned to a manuscript I had set aside for a while. Its initial impetus was a group of poems inspired by my part-time art museum job. I work with objects in the collection hands-on, and those poems reflect that experience. They became the bones of a longer project that has branched out into formally varied pieces loosely united in questioning the nature of perception, cognition, gaze, shared attention, identity, aesthetics, etc.

Posted by Thomas Whyte at 11:00 No comments:

What do you feel poetry can accomplish that other forms can’t?

Poetry can work in so many modes and genres and topics– purely emotional, narrative or historical, scientific, biographical. But I think, at its core, and no matter its subject matter, poetry is a form that usually relies on cadence and sound and music more than others; that somehow manages to present some piercing truths or perceptions that get overlaid or overlooked in our day-to-day lives; and often –not with every poet, but many-- seeks to intensify by distilling or condensing language. That mysterious process of revealing more by saying less. Poetry can also be a way to play with language that other literary forms tend to make less use of.

Posted by Thomas Whyte at 09:00 No comments:

How important is music to your poetry?

I spent years trying to learn how to play the guitar and how to read music. I hoped that listening to and playing music might help me develop a greater sensitivity to sound. I don’t have any talent, but the endless practice might have helped my poems. I don’t know.  I also learned a lot about how flexible singers can be when phrasing lines over a regular beat. The same lines/lyrics can be performed very differently. Somehow that frees up my approach to lines.

Posted by Thomas Whyte at 13:00 No comments: