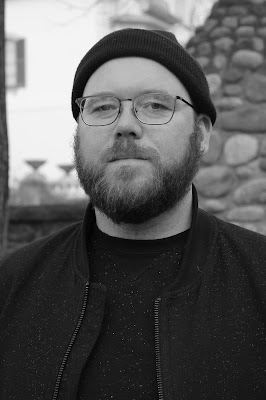 JC Bouchard's poetry appears in PRISM international, The Puritan, and Arc. His first book of poems and photographs, Let This Be The End Of Me, was published by Hybrid Heaven Press in spring 2018.

Through music and naive rebellion. I started when I was really young, about 13 or 14, around the same I became obsessed with metal, punk, and any music that subverted the norm or what I thought was the norm. It was all I cared about on any visceral level. I hated regular music and the people around me who liked it. I didn’t want anything to do with the world as I thought it was so I retreated into music. It justified my worldview and depression and warped perspective on things, such as they were.

My childhood was violent and sad and I was sad too. Music and lyrics expressed that in ways I didn’t know how. I couldn’t play an instrument because I couldn’t afford one so I wrote lyrics. A lot. All the time. I filled notebooks. One time when I was 15 or 16 my grandmother found one of them. I wasn’t hiding it. She was shocked by the things I wrote. I didn’t care. It was wonderful. As I grew older and a little smarter I discovered books and poetry and saw that writing was a thing and I could do it too, that I was actually doing it already, and maybe even one day I could make money from it and do it all the time as a job. That was 17 years ago and I haven’t stopped since.